The Ganges carries a long oar, representing the river's navigability.
The Nile's head is draped with a loose piece of cloth, meaning that no one at that time knew exactly where the Nile's source was.
The Danube touches the Pope's personal coat of arms, since it is the large river closest to Rome.
The Río de la Plata is sitting on a pile of coins, a symbol of the riches America could offer to Europe (the word plata means "silver" in Spanish).
Also, the Río de la Plata looks scared by a snake, showing rich men's fear that their money could be stolen. 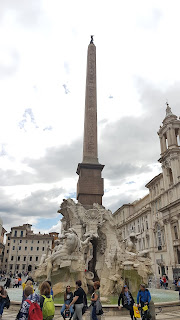 Each is a river god, semi-prostrate, in awe of the central tower, epitomized by the slender Egyptian obelisk, symbolizing Papal power surmounted by the Pamphili symbol.

The ruins of the Stadium of Domitian (Unesco World Heritage Site) in Piazza Navona are located about 4.50 meters below street level.

The archaeological site is all that remains of the first and only example of a masonry stadium up to now known in Rome.

The area is also dedicated to events, galas, exclusive visits and exhibitions.  BOOK WITH US

This video is mad by Altair4Multimedia Company, based in Rome. In this regard it is worth mentioning the large production of three-dimensional archaeological reconstructions by their studio for museums, television productions, interactive CD-Roms and DVDs.